29 October 2016: It turns out that I was wrong about being wrong with respect to the FJ-4 horizontal tail so I revised the top view drawing at the bottom of this post. Thanks to maintenance manual data provided by Frank Truchi, a volunteer at the National Naval Aviation Museum, I now know that the production FJ-4 horizontal tail leading edge was swept at 35°. The NAA drawing of the horizontal tail is therefore accurate except for the span.  (Also see http://tailspintopics.blogspot.com/2016/10/north-american-fj-44b-fury-notes.html.)

Some people are desperate for a good injection-molded kit of the North American FJ-2/3 Fury, so desperate that they consider building the ESCI 1/48th kit. While I'm sure that a fairly accurate model can be built from it, some changes will be necessary.

The most notable errors are in the forward fuselage, 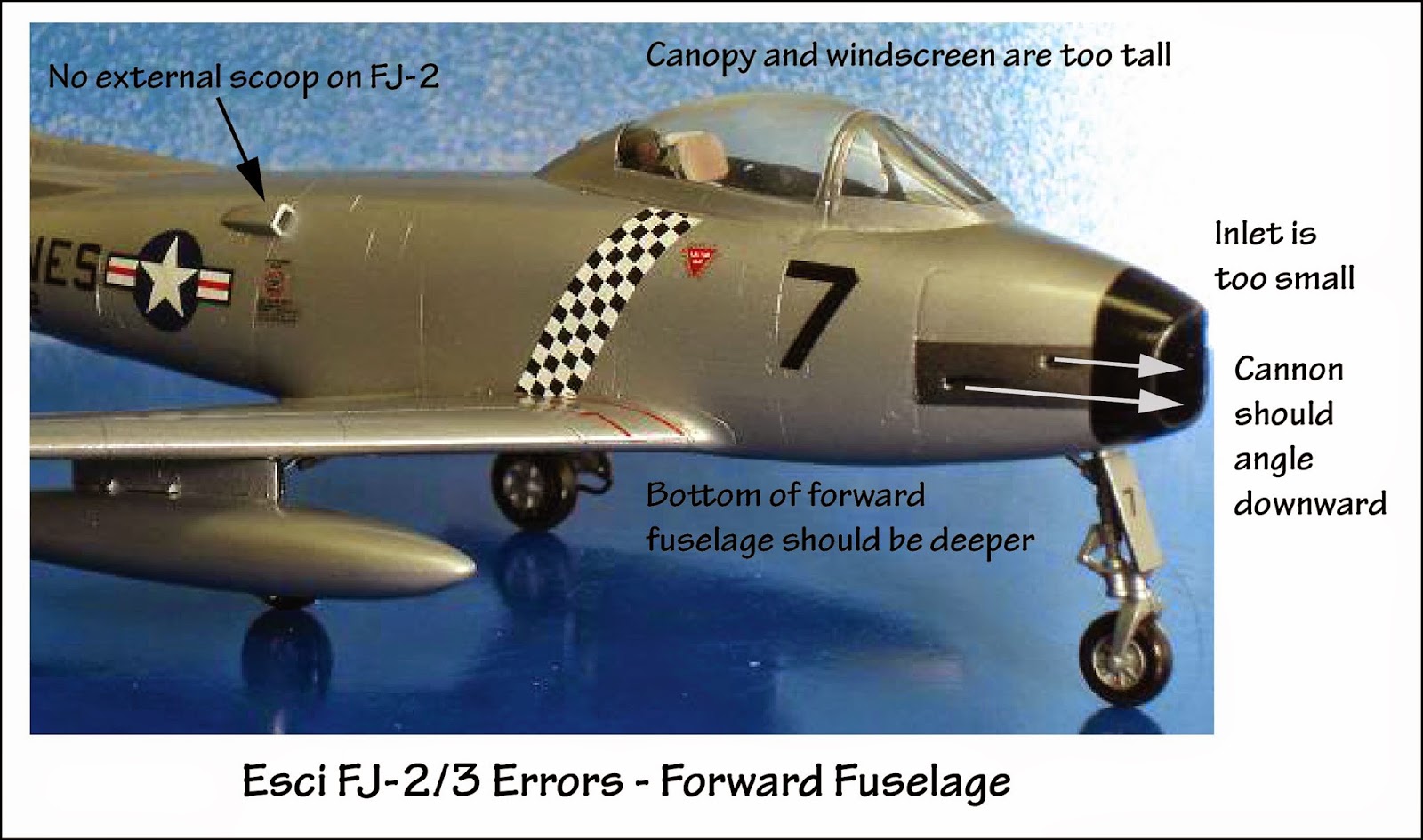 Note that the ejection seat is located too low and far aft in the cockpit.

It fairs even worse as an FJ-3, because its inlet was even deeper. (And that scoop on the aft fuselage needs to be cut down and a recessed ramp added ahead of it.)

Note that the aft nose landing gear door is not wide enough.

Since the bottom of the sliding canopy has the distinctive "dip" of the FJ-2/3's at its forward end (added to allow the pilot to sit higher for takeoff and landing while closing and opening the canopy) and the inlet is an undersized version of the FJ-2's, it doesn't make for a good XFJ-2 out of the box either. The XFJ-2 had the standard F-86 sliding canopy with a modified windscreen for better over-the-nose visibility. For an overview of the North American FJ Fury family, see http://tailspintopics.blogspot.com/2009/10/fj-fury.html

However, even given its shortcomings, the kit has possibilities. Deepening the forward fuselage wouldn't be too difficult. "Impatient Pete" modified an F-86 with this cut on the way to an FJ Fury in an ARC forums post. 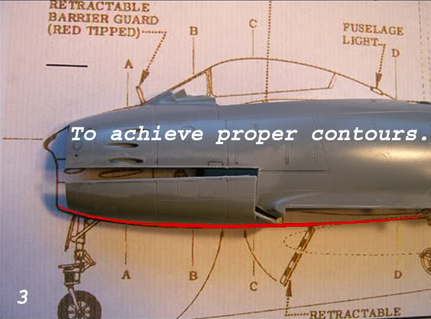 The bottom of the windscreen and sliding canopy could possibly be filed down to lower them to the right height. A F-86 canopy might be even better. 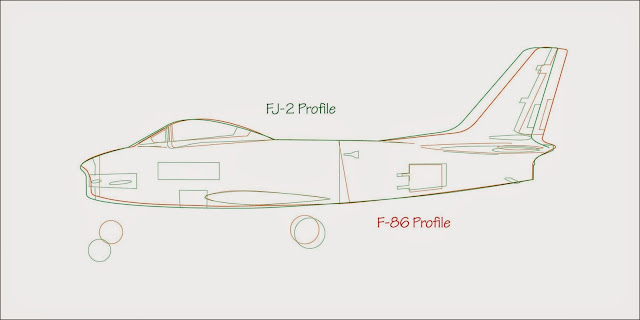 I don't have the kit so I can't say what has to be done to the wings, horizontal stabilizer, etc to improve its accuracy. For those details, see http://tailspintopics.blogspot.com/2011/04/fj23-fury-redux.html

While most of us are content to imagine the possibilities or hope for a new FJ-3 kit, Jon Kunac-Tabinor has not only sallied forth with the Esci kit, he is posting his progress here: http://www.britmodeller.com/forums/index.php?/topic/234981173-north-american-fj-3-fury-148th-esci-with-added-elbow-grease/#

However, Jon is having trouble with the quality of Esci plastic and Bob Sikkel reports that the Esci wing has the incorrect sweep and aileron location. The desperate might want to consider another 1/48th scale alternative, a mash up of the Grand Phoenix FJ-4 and a Monogram F-86.  The FJ-4's fuselage was very similar to the FJ-3's (see Jon Krol's comments below and the following illustrations). Bob Sikkel also provided the following comparison of 1/48th kit inlets to which I've added photographs of the actual airplanes. 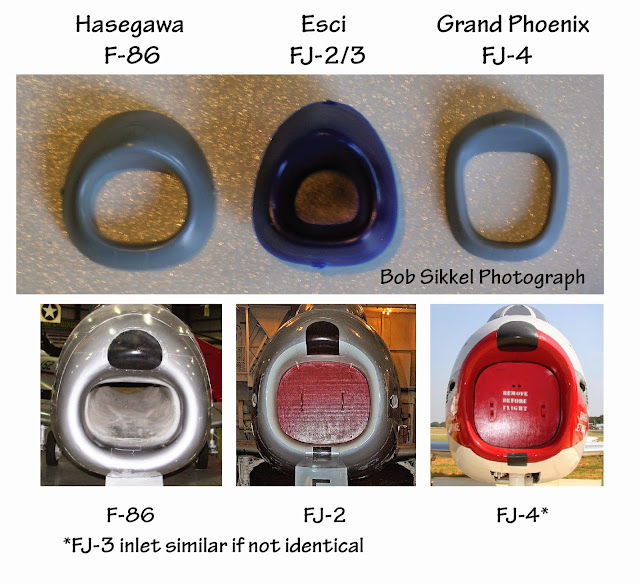 Somebody has measured the FJ-4 at Tyler, Texas as having an inlet width and height at the location of the inlet plug of 23".

The FJ-3 and FJ-4 fuselages were almost identical, except of course where it is obvious that they aren't as well as the small difference in downward angle of the 20 mm guns. While the main landing gear was very different, the nose gear appeared to be the same except that the shock strut was more extended at rest.

Note that the North American draftsman had to wing it with details like access panels, speed brakes, etc. (obvious when comparing the FJ-3 and FJ-4 side views) so there may be some variation in their location from the above. Your guess is as good as mine on the vertical fin: were the leading and trailing edges different or not?

The wings and horizontal tails were very different, which is where an F-86 kit is required. 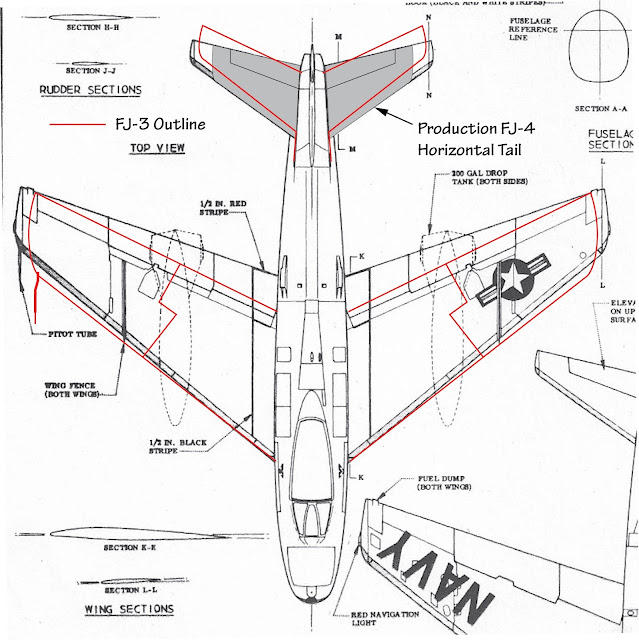 Note the difference in span between the prototype and production FJ-4 horizontal tails: 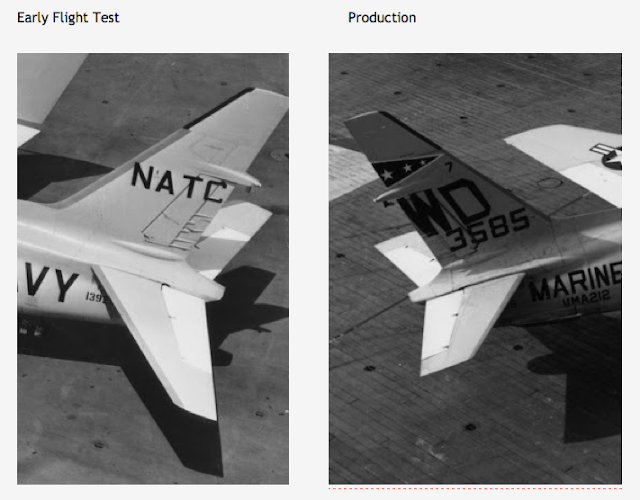