A work in progress:

Before World War II, Navy carrier-based airplane cockpits were painted with aluminum lacquer or interior green except for the instrument panel, side consoles, and radio equipment. This is the cockpit of the one and only XF4U-1 (your guess is as good as mine as to the color of the light areas): 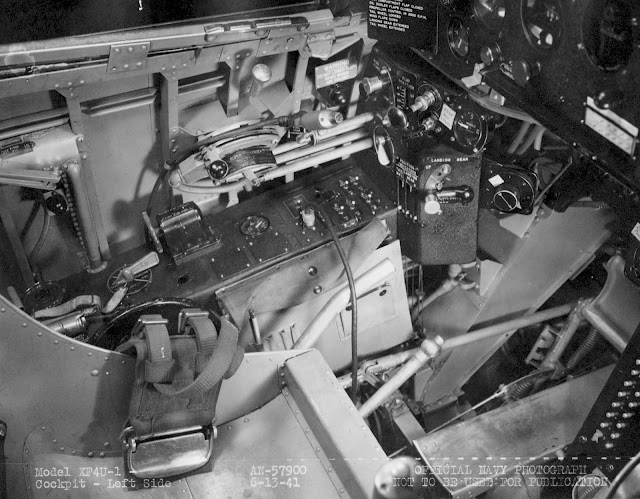 Interior Green became the preferred color for the cockpit structure early in the war (less reflective) but at some point during the war and before March 1954 (see http://www.ipmsstockholm.org/magazine/2004/05/stuff_eng_interior_colours_us_part3.htm), the cockpits of Navy carrier-based airplanes were to be semigloss Black from the level of the bottom of the instrument panel and the top of the side consoles and nonspecular Interior Green below. Ejection seats were usually interior green. After this, the cockpits were to be Dark Gull Gray (DGG)  with black instruments and consoles. Ejection seats were either black or DGG as will be discussed. Of course, the basic changeover from black cockpits to DDG ones took time and the devil is in the details. It also did not correspond directly with the change in the exterior paint scheme from overall blue to gray/white, which was decreed in February 1955, almost a year later. For more on that, see http://tailspintopics.blogspot.com/2009/12/changing-from-blue-to-graywhite.html.

BuAer color specifications often left room for interpretation or to paraphrase Captain Barbossa, are "more of what you'd call guidelines than actual rules". For example, did painting the console black refer only to its top or also to its sides? A company would incorporate its interpretation of the spec in its manufacturing documents, which were incorporated by reference in its production or spares contract with the Navy. The aircraft would subsequently go through repair and overhaul at a Navy facility every few years (sooner if it was badly damaged in an accident but considered repairable); the painting instructions at the Navy facility were not necessarily the same as the manufacturer's. As a result, the wheel wells on blue airplanes might be painted zinc chromate when it was delivered but the repair and overhaul facility would paint them blue. Also see http://tailspintopics.blogspot.com/2012/10/painting-crush-points-red.html

AD-4 Skyraider:  The floor is not obviously Interior Green but the lower section of the control stick appears to be. Note that the instrument faces are a darker black than the instrument panel itself. 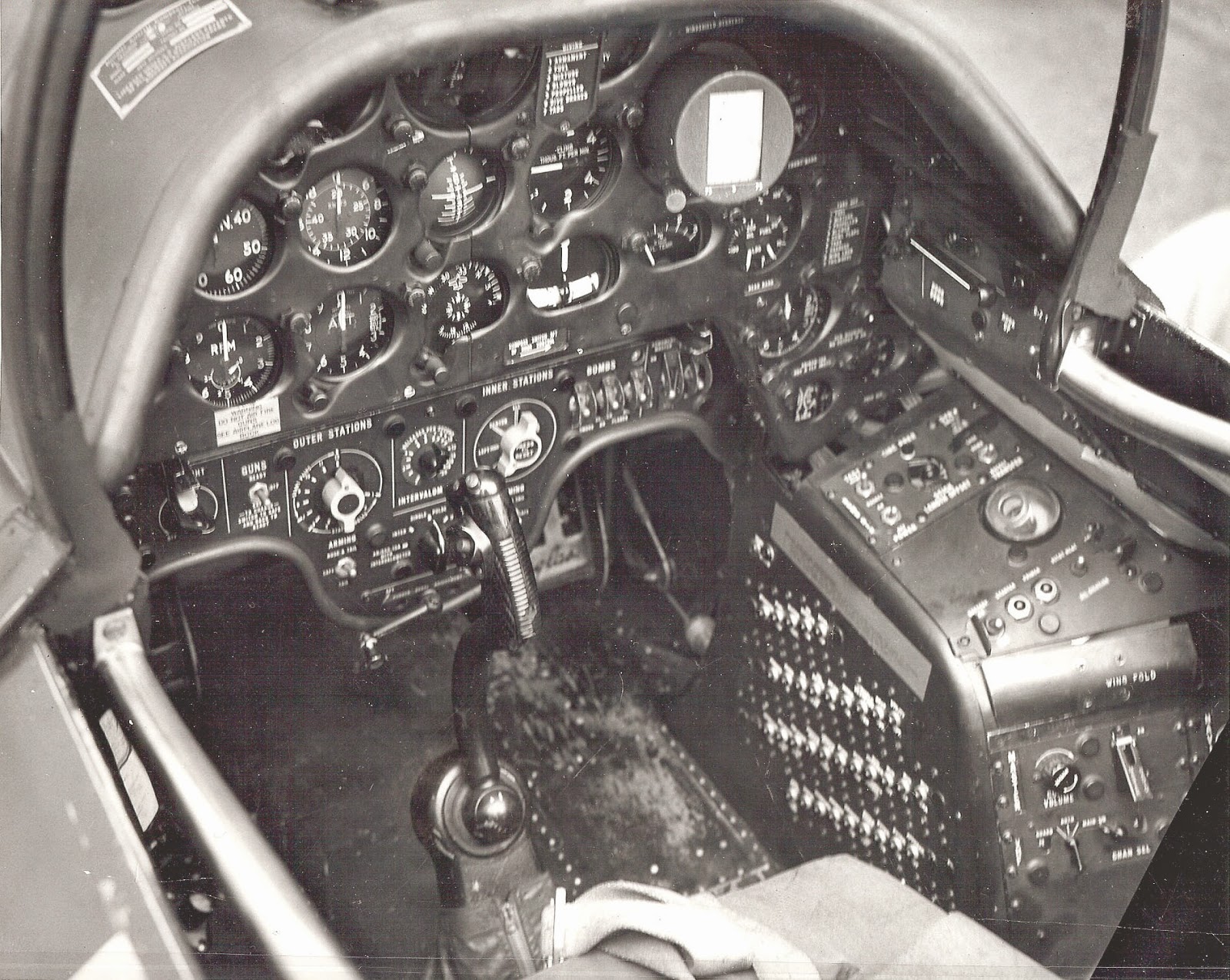 FJ-1 Fury: This is a National Air and Space Museum photo of a restoration (I'm not sure that it was one of theirs). 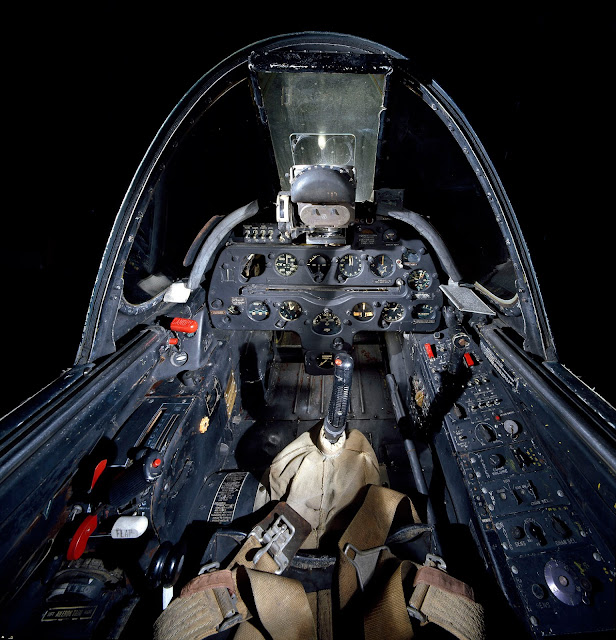 F9F Panther: This is another restoration but it appears to be fairly accurate. Note that the seat is interior green. However, in service, it would have a seat cushion or parachute in the bucket. If the seat was designed for a backpack parachute, it would be in the seat. Carrier pilots did not wear their parachutes to and from the airplane due to the consequences of it inadvertently being deployed. 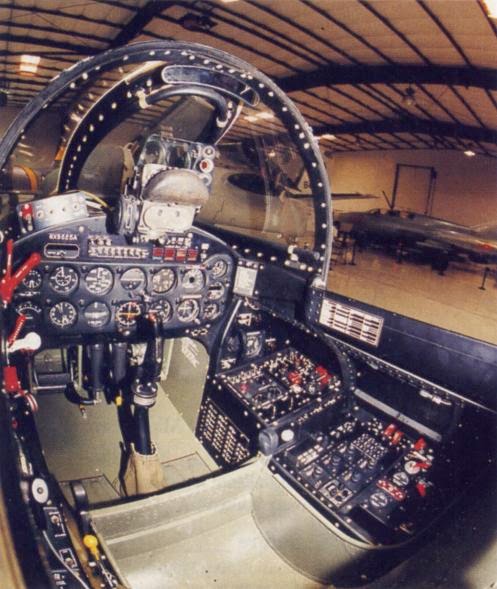 F7U-3 Cutlass: This is the cockpit of the F7U-3 being restored at Paine Field, Washington. It appears to be original. Note that it is almost completely black except for the control column. 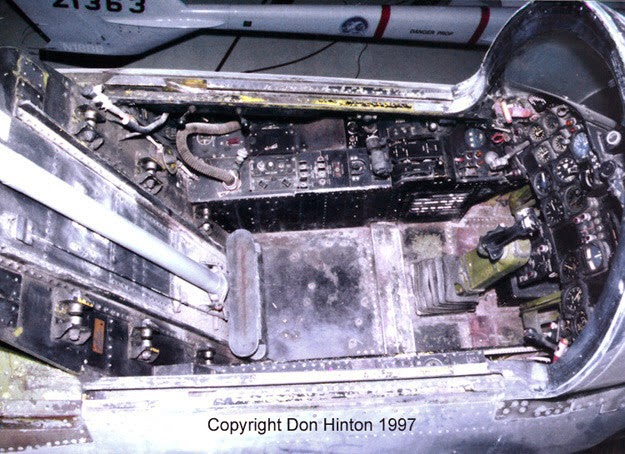 The ejection seat was Interior Green. 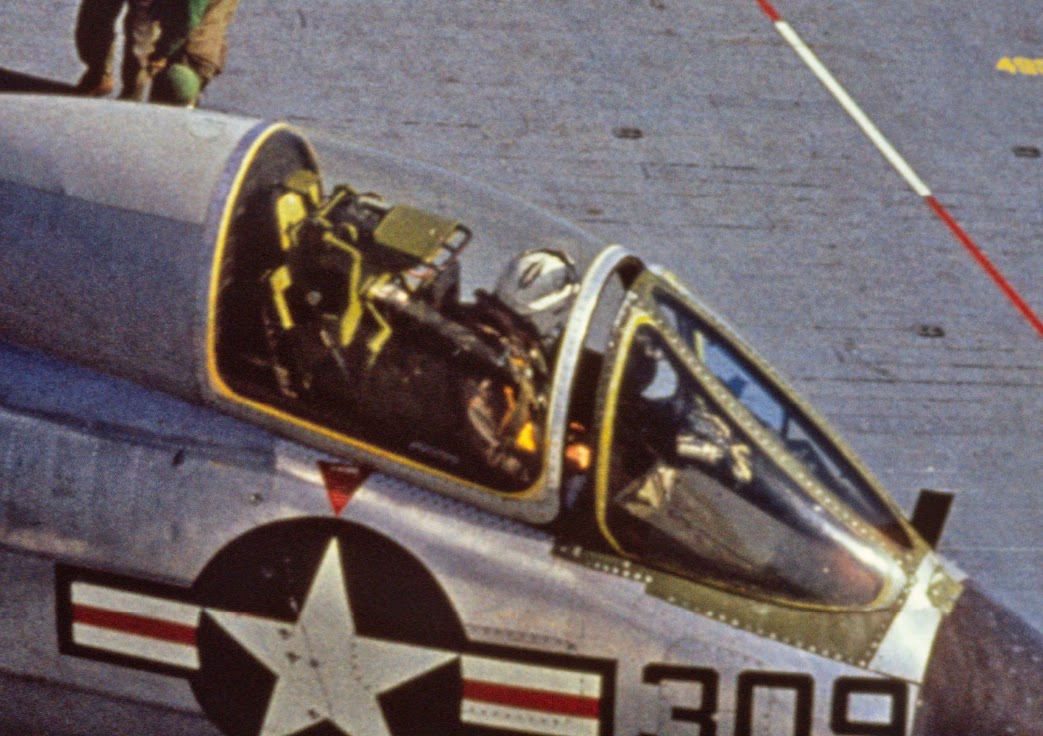 For more on the F7U cockpit and a caution on using museum airplanes for reference, see http://tailspintopics.blogspot.com/2012/12/cockpit-confusion.html

For some reason, North American FJ-2 Furys and at least some FJ-3s were delivered with cockpits in a very different shade of green, including the ejection seats. 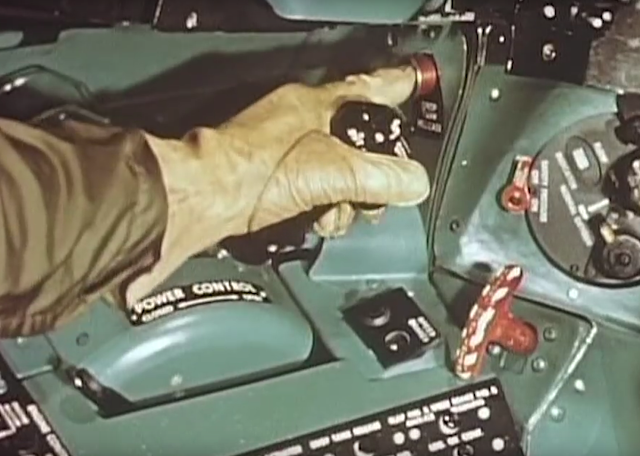 Although the change in the specification to Dark Gull Gray was issued in early 1954, this Naval Aviation News article on cockpit colors appeared in the January 1957 issue, about a year and a half later given publishing lead time. 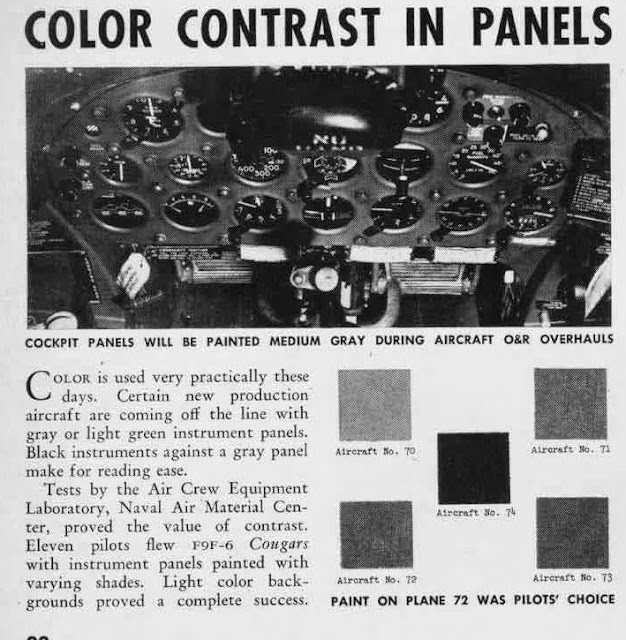 Note that it mentions light green instrument panels, which might be the case with the FJ-2/3 as discussed above.

For more on the FJ-2/3 "green" cockpit, see http://tailspintopics.blogspot.com/2021/08/north-american-fj-23-cockpit-and.html

The basic black cockpit was eventually faulted as being too dark. After some experimentation, the specification was revised to change the instrument panel to dark gull gray along with the sides of the consoles and the floors. This FJ-4 cockpit (not a museum airplane) is an example. 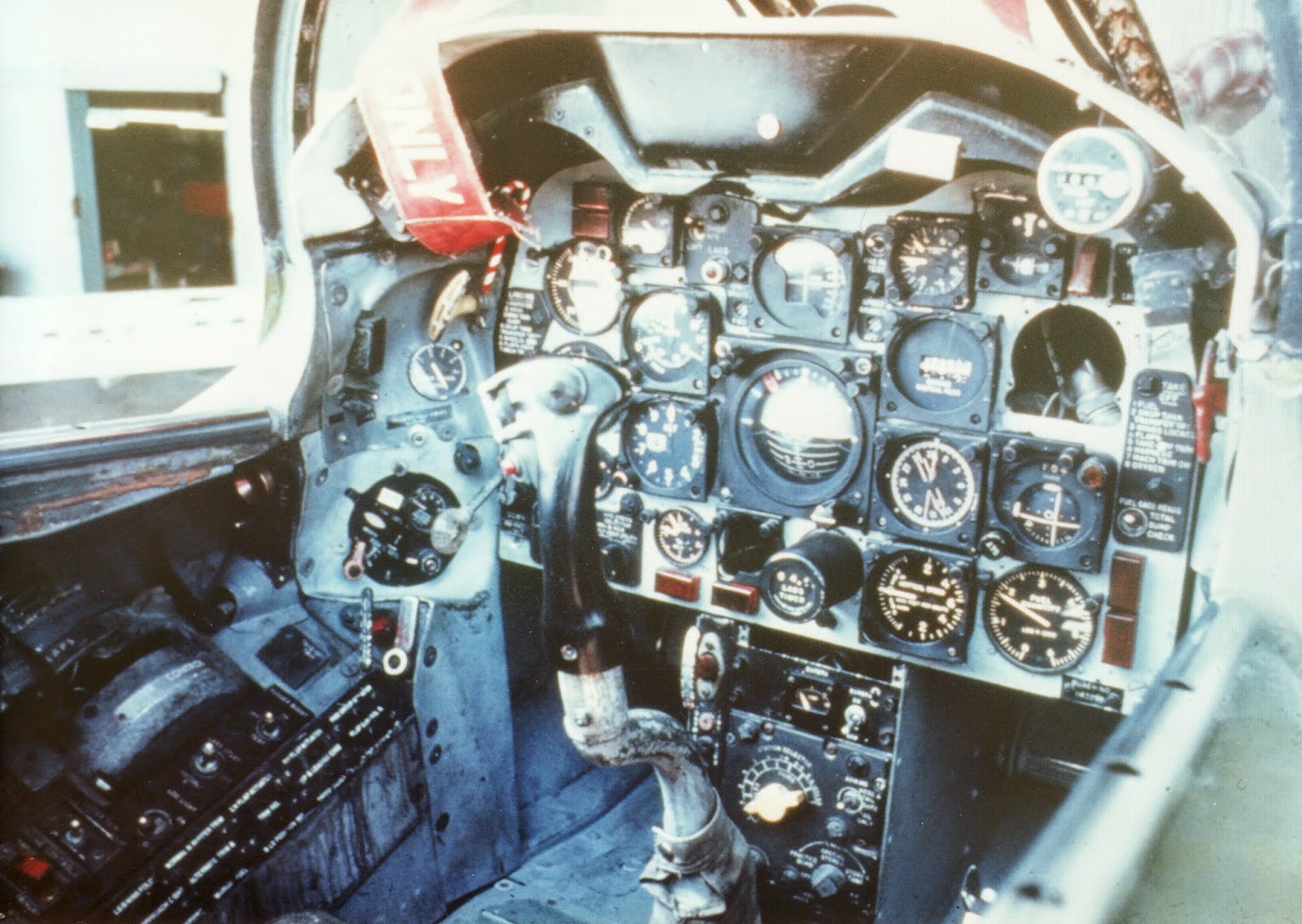 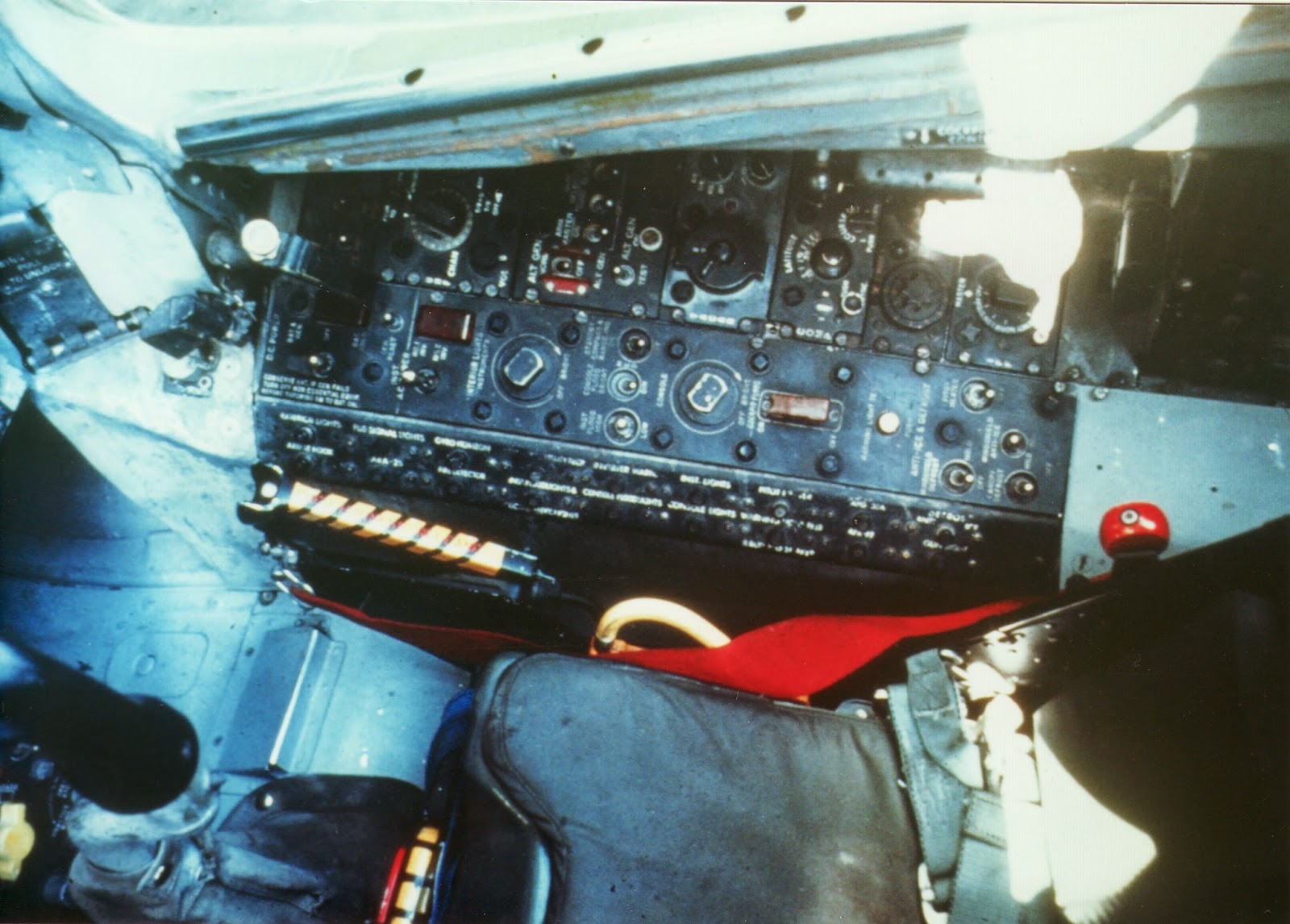 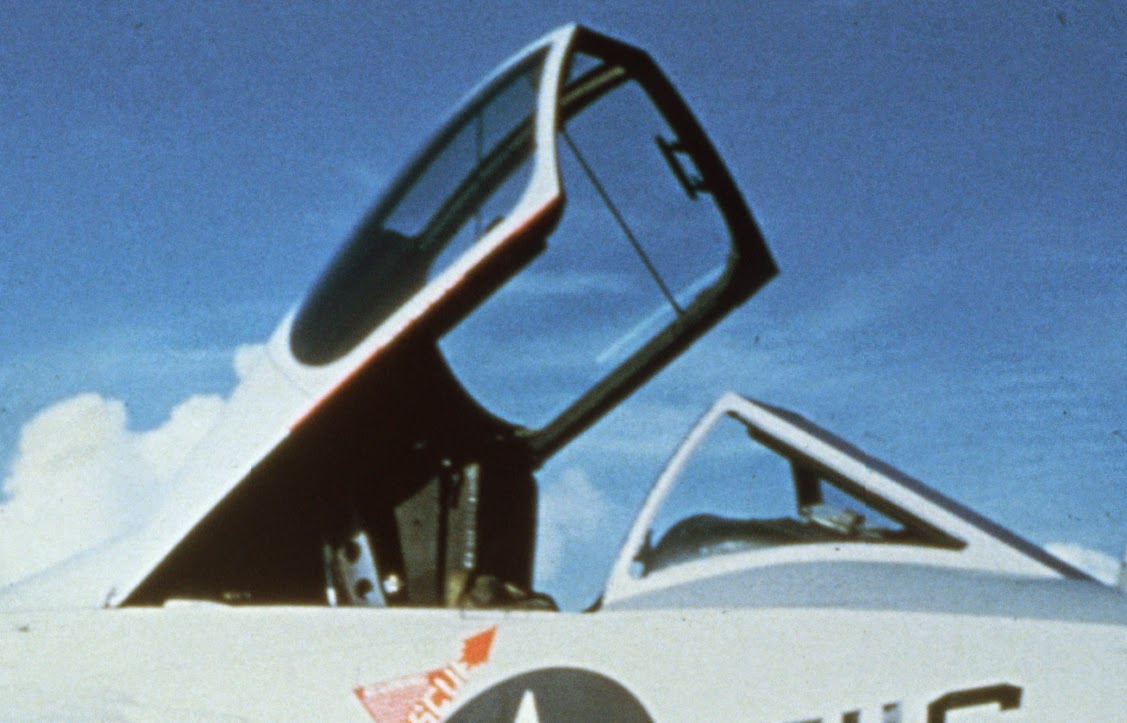 In May 1963, the Navy finally decreed that ejection seats be dark gull gray. 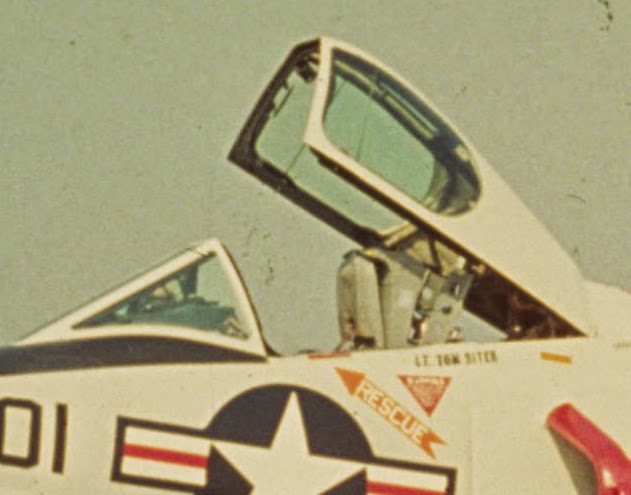 However, Grumman painted the headrest of some seats black and of course, all Martin Baker seats are overall black. 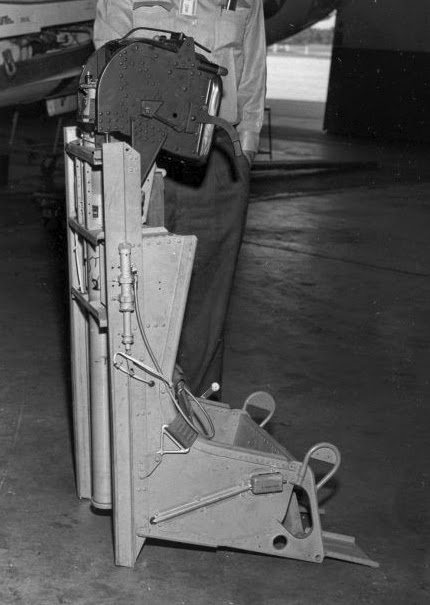