The F3H-2N was capable of carrying Sidewinders. The F3H-2M was equipped to fire Sparrow Is. The F3H-2 was armed with both the Sidewinder and the Sparrow III. Most of the -2Ns were converted to -2s; the operational (deployed) career of the -2M was fairly short because the Sparrow I was ineffective. For pretty good drawings of the Sparrow missile family, see https://tailspintopics.blogspot.com/2013/08/things-under-wings-sparrow-missiles.html.

The Sidewinder and Sparrow III pylons and launch adapters were slightly different and it appears that deployed F3H-2s generally carried two of each. The Sidewinder adapter was all white and extended aft beyond the end of the pylon, which was shorter than the one used for the Sparrow. The launcher was the AERO 1A.

The Sparrow III adapter was two-tone dark and in many pictures, there is an orange "box" mounted on the top of the adapter just forward of the pylon. It has an open front end, possibly for cooling air. The launcher was the AERO 4A.

The Sidewinder pylon was often mounted inboard and the Sparrow, outboard, but the reverse was not unknown as shown above.

The Sparrow III was basically all white, usually with an off-white radome because it was made of a different material than the body and darkened more over time. This is a picture of a test missile but it is similar to the operational one. (From what I can tell, operational missiles don't have the small dark cylinders around the exhaust and the external channel ends aft of the forward wings.) Operational Sparrow IIIs seem to be marked with an  R and a number, presumably a serial number, as shown here. 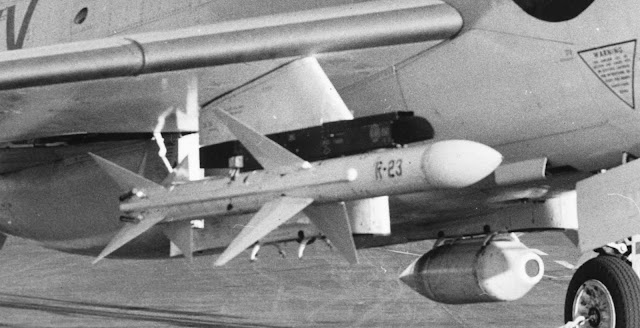 The pod on the left  fuselage pylon (station 4) contains a camera.

Another non-operational picture showing the length and outline of the Sparrow III adapter relative to the missile and the pylon:

Operational Sparrows were marked with yellow and brown bands. Brown indicated the presence of a rocket motor and yellow, a warhead. 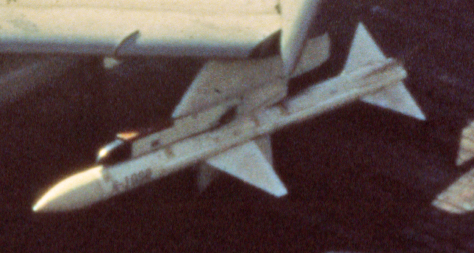 Note that the midsection of this adapter is white but the ends are black or very dark gray and the orange "box" is present.

For completeness, the AERO 3A launcher was used on the F3H-2M with the Sparrow I missile. It had an adaptor with a different profile and color. (It appears to be gloss sea blue, which may have been a legacy of the period of its development.)

The Sparrow I had sharply pointed nose compared to the Sparrow III since it received its guidance from behind, not ahead:

Another picture of the Sparrow I, pictured here on an F7U-3M with a pylon-extension wedge between the pylon and the launcher.

Note: On some aircraft in service, the two upper 20mm cannon were removed by ASC 169 in order to reduce gross weight.