For a summary of the McDonnell F3H Demon program, click here: https://tailspintopics.blogspot.com/2010/11/f3h-demon.html

Among a few early changes to the F3H Demon that were required after it first entered service were roll-control spoilers. These were literally scabbed onto the top of the inboard surface of the wing ahead of the flaps. Two long "fingers" were present to cover the openings cut into the wing skin for the actuators. Note that while the spoilers look like speed brakes, they were never extended in flight at the same time. 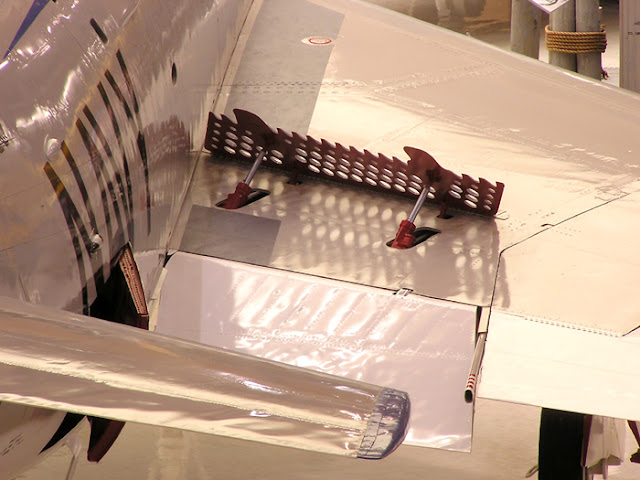 These were belatedly required because a notable loss of roll control power was being experienced at high indicated air speeds. The reason was a lack of wing torsional stiffness. At a high enough speed, the aileron, instead of reducing or increasing lift on a wing, began to function like a servo tab on a control surface, in this case twisting the wing so that instead of increasing lift, the deflected aileron caused the wing to deform, reducing its angle of attack and therefore lift (the Wright brothers actually used wing warping initially for roll control instead of ailerons).

As it happened, in the process of redesigning the F3H to substitute the Allison J71 engine for the Westinghouse J40, McDonnell also increased the wing area aft of the wing torque box. 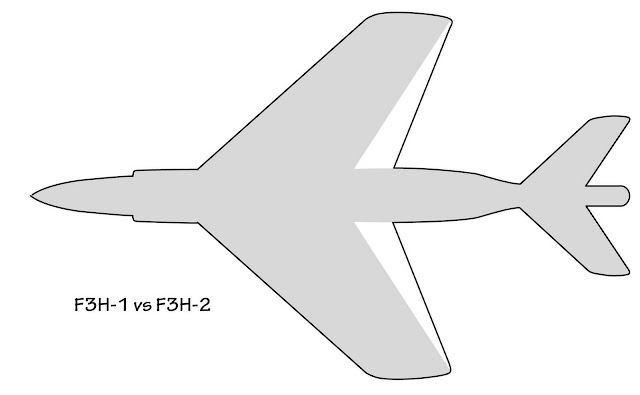 Presumably this reduced the wing's torsional stiffness but it was not predicted to be enough to be a problem at high speed.

Instead of beefing up the wing to increase torsional stiffness, McDonnell and the Navy elected to add inboard spoilers. When the airspeed increased above 560 +/- 7 knots, lateral control was switched from the ailerons to the spoilers; when the speed subsequently decreased below 545 +/- 7 knots, lateral control switched back (the switch took about two seconds). When flight control was via the spoilers, only one was extended at at time; the ailerons were fixed in a neutral/faired position.

The need for this complication was fairly limited, since the F3H could only achieve this indicated airspeed in level flight below 10,000 feet and only in a dive below 20,000 feet. However, it was considered by the Navy to be essential and in fact the switchover speed was classified, presumably because knowledge of it and the switching delay might prove useful to an opponent in air-to-air combat.

When I observed in a blog post that both spoilers shouldn't have been extended on the F3H at the National Naval Aviation Museum, someone wrote to suggest that they sometimes were. Well, maybe, but until I saw a video recently of an F3H taxiing with the wings folded and both spoilers extended, I was dubious: 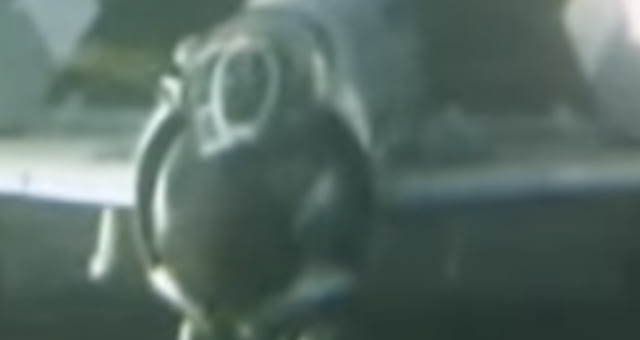 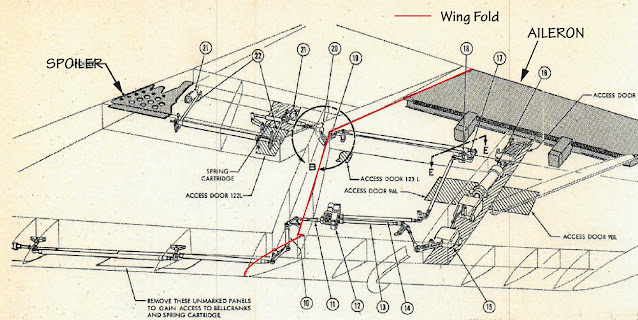 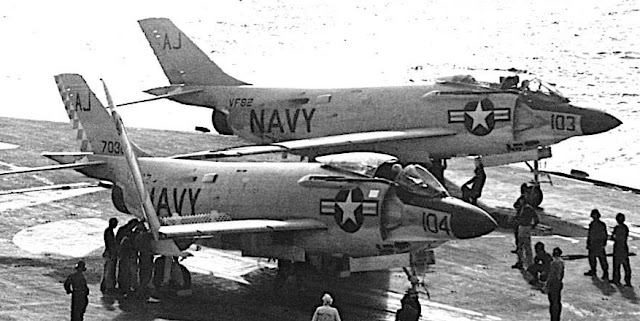 Note that 104's spoiler is up; 103's is not (one F3H oddity is that the pilot did not have control over wing folding; a deck crewman had to fold or unfold the wings).

Transitioning a mechanical control system across the wing-fold joint was always an interesting design problem. See https://thanlont.blogspot.com/2011/03/grumman-sto-wing-redux.html. It often resulted in ailerons being positioned "unnaturally": 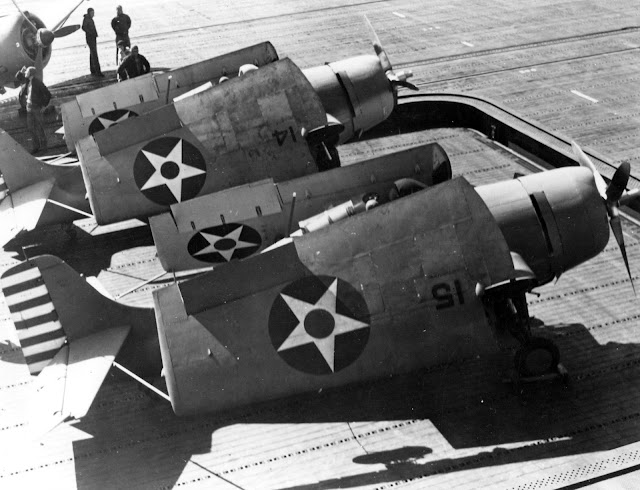 It's not clear how long it took for the spoiler to lie back down after engine shutdown. In the following picture of what appears to be a respot of the deck immediately after a recovery, the spoilers on the F3H in the foreground appear to be down while at least one on the F3H coming behind it is still up. 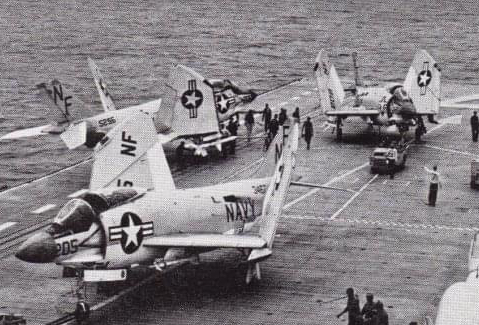 With respect to a parked F3H, while you can be pretty confident that the spoilers are down (for sure if the wings are not folded) and the speed brakes extended (although there are exceptions), the configuration of the other control surfaces is not certain either. This photo illustrates some of the possibilities: 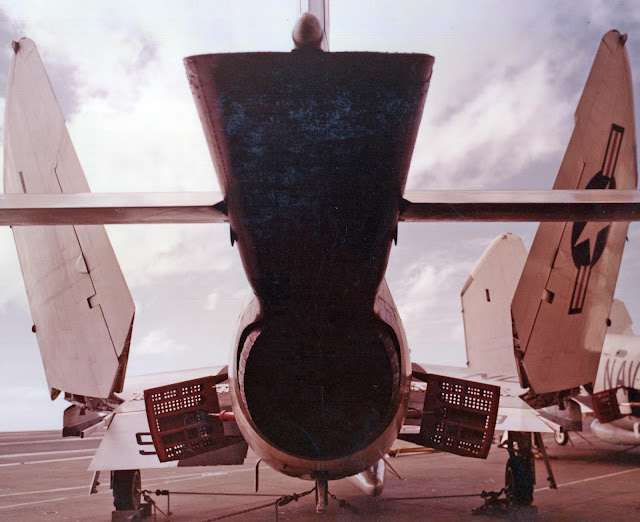 In most pictures, the ailerons on a folded F3H are both positioned slightly "up"; in this case—and there are other examples—they are slightly "down". It's unusual to see the flaps down and in this case, only one is. It is only rare to see an F3H parked, unfolded, with the wing slats extended and even rarer to see one with the ailerons drooping.