Most landing gears consist of an oleo or cylinder mounted to aircraft structure and a piston on which the wheel is mounted. The piston functions as a shock absorber. The two are connected with a mechanism that does not allow the piston to twist within the oleo. Often that is a torque link or scissors.

The scissors on the F3H nose landing gear is more complicated than usual because it also provides the means to shrink the unit to fit in a shorter wheel well. Instead of two links, there are three. Two shrink struts, one on each side of the scissors, pull the piston up as the nose landing gear is retracted. Note that the right-hand shrink strut, but not the left-hand,  has a bend in it to provide clearance with the landing gear strut and the lower end of the middle link extends beyond its connection to the lower link. 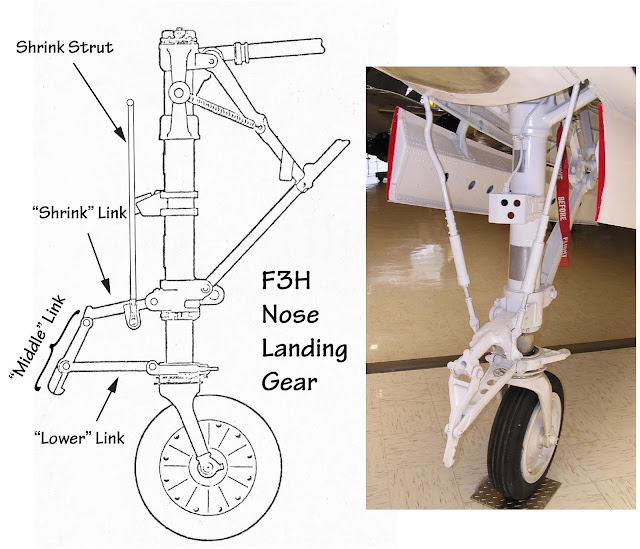 The shrink link is angled slightly downward and does not move as the piston absorbs the shock of landing. The middle and lower links keep the oleo and the piston aligned. 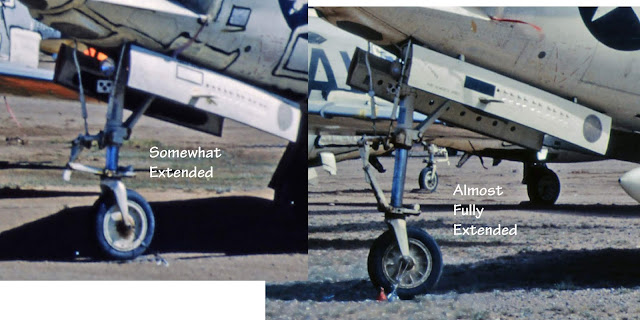 The lower section of the middle link that extends beyond the pivot point either keeps the scissors from over-centering or takes some of the load off the pivot point, possibly both.
Posted by Tailspin at 9:23 PM