What got me a little bit too deep into a P-80 configuration analysis (although it doesn't take much encouragement when I get good material to work with) was delineating the differences between the P-80A used for carrier trials on Midway and the P-80C that the kits usually represent. Paul Boyer and I had done a Tailhook Topics column on it in for the IPMS Update once upon a time.   What I discovered in doing some more research was that the windscreen had to be moved back about nine inches and the canopy shortened a equal amount. The change was made with the incorporation of the ejection seat in the P-80B, which resulted in the windscreen being moved forward. While this is fairly obvious when you start looking closely at pictures (1/8 inch in 1/72, certainly in the range of noticeable on a model of a small airplane) there doesn't seem to be much awareness of it. (Bob Steinbrunn included it in his YP-80A conversion article in the January 1989 issue of FSM, but he moved the whole cockpit aft by nine inches.) None of the drawings on line or in publications that I've seen show much if any difference in the canopies between P-80s with ejection seats and without. The windscreen is often placed somewhere between the correct forward and aft location. Of course, it doesn't help that the Lockheed-produced P-80 inboard profiles available to me show an incorrect windscreen for the P-80B and P-80C as built or that the Navy's SAC for the TO/TV-1 (P-80C) has a P-80A windscreen and canopy.   The canopy size and location must be right for a P-80C on the various kits since I don't recall seeing any mention of it not being so...

In summary, the P-80A did not originally an ejection seat. The P-80B and C did. The incorporation of the seat required that the windscreen be moved forward about eight to nine inches and the forward end of the canopy lengthened accordingly. However, the location the aft cockpit bulkhead, instrument panel, and flight controls did not change. The gun sight was moved forward along with the windscreen. With the C, a ballistic jettison of the canopy replaced the mechanical jettison mechanism, which added a "tail' to the end of the canopy; the mechanism was housed under a cover on the aft deck of the sliding canopy that also sealed off the cockpit from a pressurization standpoint. (Note, the antenna on the inside of the B/C canopy is not shown and the depiction of the canopy deck aft of the headrest is notional.) 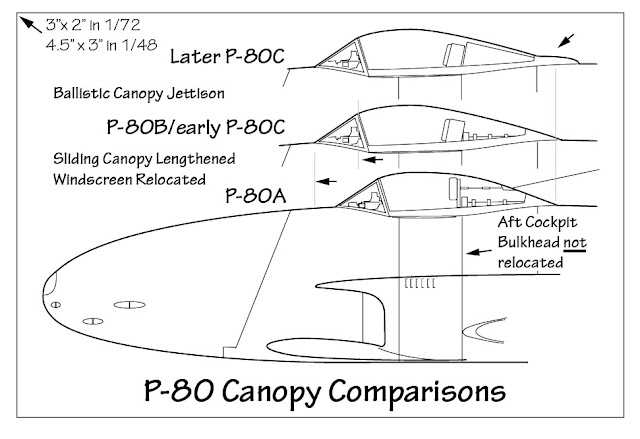 The later P-80C sliding canopy was retrofitted to the B.

Gerry Asher provided the best illustrations that I have of the P-80A canopy deck at the moment. 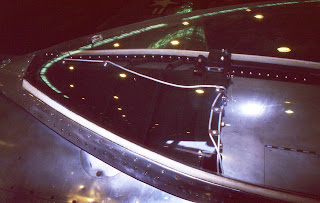 Note that when the canopy slides aft, it exposes the top of the fuselage aft of the opening to the cockpit.

In some pictures of the P-80, notably those with the P-80B canopy as pictured here but also A's, there is a triangular gusset at the lower aft edge of the windscreen that overlaps the lower front corner of the sliding canopy.

My guess is that it was added to keep the canopy from initially moving laterally and hitting the pilot's head when it was jettisoned. It appears to have not been required with the later C canopy.

Note that the B/C canopy slid almost straight aft, whereas the front of the A canopy was raised as it started to move aft. (This is a test P-80A with no gun sight.) 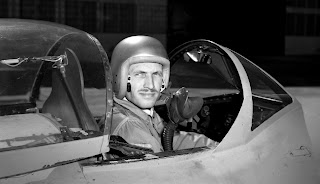 Note the gusset that has been added to the windscreen frame.

The P-80A inboard profile of the forward fuselage: 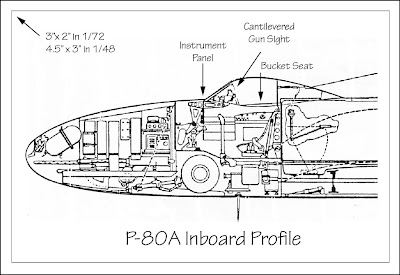 The small cockpit was made smaller by the incorporation of the ejection seat. However, the pilot was not moved as far forward as you might think because the bucket seat and armor plate were located somewhat forward of the aft cockpit bulkhead, whereas the ejection seat rails were added as far aft as possible.

Gerry Asher and Bob Esposito are my go-to guys on the P-80.

First rule in USAF aircraft is never trust the externals to define the model. Modifications in the form of Time Compliance Technical Orders (TCTOs) have a long history wth USAF aircraft, and the early P-80s display a variety of them - the pitot placement being one of them. It was on the vertical fin of the A & B models delivered off the production line; the chin-mounting began on the C - it was retrofitted to the A & B eventually.

All the P-80As - through 44-85491, anyway - left the factory in gloss gray. You'll note this one's stripped to bare metal - obviously been in service a while - long enough for a few TCTOs to be done (including the pitot). 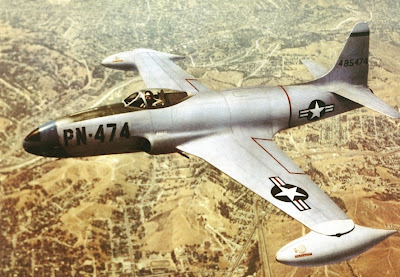 (Yes, the sliding canopy was tinted.)

To add to the potential confusion, many P-80As were not only retrofitted to the P-80C configuration (the major change presumably being the more powerful engine), including the incorporation of the ejection seat, but redesignated as P-80Cs while retaining the original P-80A serial. The photo-reconnaissance RF-80As converted from P-80As also did not have ejection seats originally but a similar retrofit was accomplished on some of them.

You're on your own with respect to other detail P-80 configuration changes like the wing tips (round versus square) and different drop tanks. (The Navy did shore-based catapult testing of its P-80 with the drop tanks installed and determined that it was not suitable for at-sea trials from a structural or performance standpoint.)

I was disappointed but not surprised to see that while the 1/72 Sword P-80A/B provides both the bucket and ejection seats, the windscreen is in the P-80B/C position and the sliding canopy is that of the P-80B. 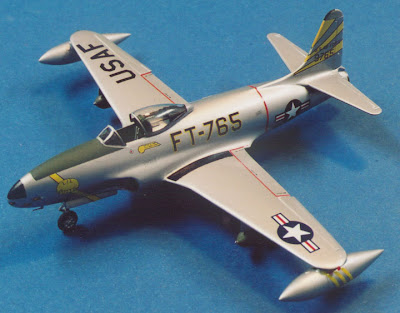 He also sells many other conversion kits and decals for the Lockheed P-80/T-33/F-94 series as well as other jets of that era. Contact him for a list of his kits at gmasher@netzero.net and also ask to be added to his email list.
Posted by Tailspin at 9:26 AM