In my post on the Bell XFL-1 (see https://tailspintopics.blogspot.com/2015/09/modeling-bell-xfl-1-airabonita.html), I included a sketch to show the difference between the P-39 and XFL-1 wings. It was created before I had become proficient with Illustrator and regretably, I wasn't very rigorous about the shape of the P-39 wing (the XFL-1's is pretty good but I'll redo that illustration in the near future).

It turns out that some modelers gave me more credit for the drawing's accuracy that it deserves and lacking a better one of the P-39, have used it to evaluate the wings in various Airacobra kits. As a result, I have created a pretty accurate drawing of the planform using Bell data and a piece of a Bell P-39 drawing in my collection.

Wing planforms are generally defined by span, root and tip chords, and the location of the root and tip chords along a span-wise line. Usually the root chord is located at the aircraft centerline for the benefit of the aerodynamicists but not in the case of the P-39. It was located at the side of body, which is where non-aeronautical engineers would think the root chord would be. The span-wise line in the case of the P-39 is perpendicular to the centerline and at 30% chord. That data establishes the location of the leading and trailing edges. The tip can be defined in different ways; based on an XFL-1 wind-tunnel model drawing, it was probably a portion of a pair of circles that were faired into the leading and trailing edges. Unfortunately, I did not have a drawing with that data but I did have a Bell drawing of the Model 4A wing tip that is probably close to right. On the other hand, the shape of the aileron is iffy; I don't have a Bell drawing for it and the ones on the internet differ. 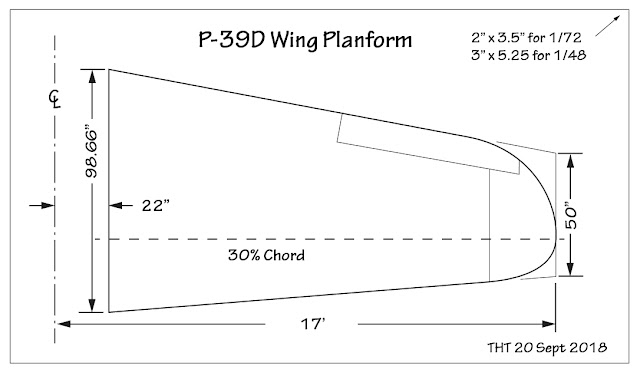 Note that I didn't correct for dihedral or incidence but those would be very small differences. 100" is given as the root chord for the Model 4 proposal (and a wing span of 35'), the P-39E and the XFL-1. In the case of the latter, however, it is located at 17" from the centerline and might therefore be consistent with the P-39D root chord value.